skip to main | skip to sidebar

Welcome to our life. Loving our boys and enjoying every second! 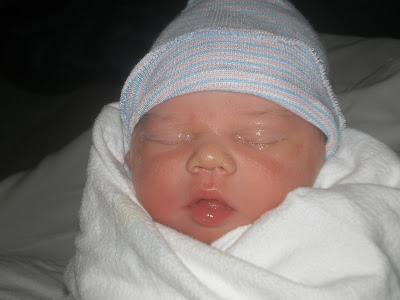 On September 12th 2007 Austin made his grand entrance. My Mom and I had taken Kaden on a long walk and by the time I had gotten back to the house I was having contractions that were getting more intense. They were coming every 5-8 minutes. I decided to wait it out a bit to make sure this was actually "it". Over the next four hours my contractions had become more regular. They were coming every 5 minutes and had been for about an hour. Around 4pm we decided to head to the hospital. My Dad came by and picked up Kaden and we headed to the hospital. My Mom met us there. When I got into my room, they checked me and I was only 2 centimeters...I was so bummed. That is exactly what I was the day before at my doctors apt. I thought i had made some progress since then. But no... The nurses told me to walk around for a bit and they would check me again in an hour. They did and I had dialated to 3. They still weren't sure if they were going to admit me yet since there still was a chance labor could just stop. I walked around more and they checked me again and I was the same! By this point I was sick of walking around. My contractions were getting more intense and I was continually progressing. I kinda knew at that point that I wouldn't be going on. They still waited to do all th bloodwork and final steps to get me admitted and registered. Around 9:45 my water broke. It was in the middle of a contraction and I felt the pop. It was really weird. The nurse knew then that I wouldn't be going home and she began to get me admitted. Within minutes I was asking for an epidural. The pain was unlike anything I had ever felt and I just didn't know if I could take it. Since it was 10pm, I couldn't just get an epidural. The nurse told me she would page the anesthesiologist. Basically to spare the details. It took less than an hour from when my water broke to be fully dialated and ready to push. The midwive showed up and told me to get up and drain my bladder...At that point, she didn't realize that I was fully dialated and ready to push. Somehow I managed to get back in bed. She checked me and told me that I was ready and I could push when I felt the urge. I literally pushed like 3 times and he was out. Austin was born at 11:07pm. It was crazy fast. No time for an epidural. He is beautiful and perfect. Kaden came to meet his brother the very next day. Kaden was so sweet with Austin in the hospital, we were able to get some really great pictures of him meeting him for the first time.

Alyssa
I am the wife to the best man in the world, Mike. We have 3 boys, Kaden, Austin and Weston. We love our family and friends. I love seeing my boys grow and change every day. I want to remember it all, and this helps me do that.